‘Boris Johnson’s bid to become prime minister has been thrown into chaos after police were called to a blazing row between the MP and his girlfriend’. The Metro.

The above Orwell quote to my mind is without doubt one of the most powerful, yet little known truths of our time; of all times in fact. And if we were to apply it to Brexit; how we got here and where it’s going – militarisation – then the current fog of confusion would lift to make a number of deliberately engineered, Machiavellian events easier to interpret more accurately and to provide the means with which to ‘read’ our ideological direction; to chart its course as it were…

Does no-one find it in the least bit odd that with the exception of a brief flirtation with the truth surrounding Windrush and the PM in her previous role as Home Secretary having ‘lost’ #Lost114VIPaedoFiles; the British Establishment and its media that kept the #BallymurphyMassacre, the cover-up of which contributed to #BloodySunday and the #MiamiShowband murders and Orgreave secret since forever; that’s kept a lid on Hillsborough, Dunblane & Grenfell and on the British State perpetrated genocide-atrocities in Iraq (by WMD propaganda) and now taking place in Yemen (it’s all connected) suddenly got so candid or ‘complacent’ – in not being able to ‘D-Notice’ the PM-in-waiting’s two-am tiff with his latest power-squeeze?

Is no-one actually logically-processing that Johnson is the absolute shoo-in for the job of Prime Minister (political head of a war-machine posing as ‘country’) who can only possibly fuck it up for himself..?

“From the crash of 2008 onwards… can you think of anybody who stuck up for the bankers as much as I did? I defended them day-in, day-out against those who frankly wanted to hang them from the nearest lamppost”. Boris Johnson.

It may take some time, if ever, for us to find out the truth of this domestic ‘incident’ but what is certain, is that the general public still fail miserably to question events and versions therein, that #ToryAnalytica – and their mainstream media spoon-fed us by Machiavellian misdirection and political-theatre, during which despite all the chatter, no-one except the UK SIS can with any certainty pin-down Johnson’s precise location(s), or know who he’s met with in the subsequent 48 hours or so…

“Hunt would predictably be seen as the safer, saner personality to implement the propagandistic ‘Managed No Deal’, which is in actual fact characteristically-destructive British exceptionalism code for ‘coup d’etat”. – Gaslighting Gilligan

Of course many would relish the prospect of a full-on #DarkTriad; Machiavellian, pathological, self-serving narcissist like Johnson to be out on his arse both relationship-wise and potential PM-wise, but we must resist our innate and conditioned bias-confirmation tendencies and question the things we want to be true; or indeed in his case given his misogynist character that would seem to be true to type – and therefore – ‘end of story’.

Because there are possibilities that no-one (with the exception of overseas intelligence services and his inner circle) is considering; and certainly not the egotistical, navel-gazing Remain #GroundhogMay commentariat, given the wider context of the joint, failing #TrumpRussia #BrexitCoup d’etat.

You see despite Johnson’s previous and undeniable ambition when the game was rigged in his favour – and our unquestioning conditioning fed to us via cyclical-media messaging for him to become Prime Minister, now that the Bullingdon Club board has shifted from underneath his own feet to take him hopelessly out of his depth, I believe he’s actually, well, completely shat himself.

This is what we’re collectively struggling to process – as it challenges many the things about him we previously held to be ‘true’ for so many years.

But now seeing him as a liability to their individual liberties (or worse) puppet-Masters Bannon, Marland, Murdoch and Mercer et al may have convinced Johnson that the #RoryTheTory ruse was going to work in order Stewart – not Johnson – could be imperceptibly-eased by media management into the Premiership role.

This was in order the ‘moderate’ Tory could be seen to manage a ‘non-Brexit’ related ‘National Emergency’ – that’s entire point would in fact be to deliver a version of the much-delayed 2017 ‘Brexit Exit’ strategy regardless.

However, now that the Kingmakers attempt to install Stewart has failed, in typical cowardly fashion it may well be that Johnson himself is now running scared from the role – with or without his puppet-Masters permission.

It’s also feasible that his girlfriends shouts of “Get off my fucking laptop”, “Get off me” & “Get out of my flat” came about as a direct result of his inseparable narcissist-paranoia behaviour; justified or imagined, given Johnson’s long-term active-participatory role in the failing #USUKCorpGovt transatlantic coup. It’s even possible, though less probable, it’s all an elaborate act working with his girlfriends media-experienced assistance under #ToryAnalytica instruction, to gradually withdraw himself – unannounced – via a series of faux faux-pas in order to make himself a lame-duck and to get out of the running in an already predetermined FPTP two-horse race (which is how British ‘democracy’ works as a whole!)

You see, having been monitoring a number of cyclically-reinforced MSM themes and narratives since September 2016, many of which dovetailed with UK Government policies as well as historical precedence, I processed through this ‘Gaslighting Gilligan’ journey a similar propaganda campaign that saw the once unknown, UK Parliamentary-unelected but cyclically-MSM platformed Nigel Farage, presented and media-produced as a measured, alternative ‘anti-Establishment‘ political authority – but who was in fact #ToryAnalytica’s ideological decoy all along; driving the ‘proletariats’ predictable emotions and behaviours – not reflecting them – as was first claimed in 2010.

As such, it’s also possible that as with the media-stage managed Rorython Theatre Production I’d been monitoring since he was appointed Prisons Minister, then International Development Secretary, his grinning-assassin ‘too good to be true’ campaign collapsed, either under the weight of his own voting-record hypocrisy or indeed, did so with a little help from #GaslightingGilligan (or both) and which subsequently led to a revised, panicked, pivot-propaganda campaign getting underway – to install Jeremy Hunt – with Johnson’s (internally stated or not) blessing. 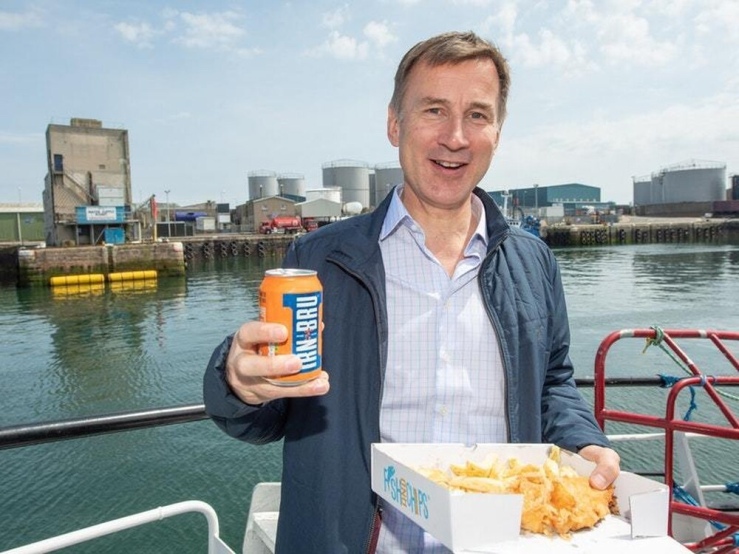 And so with these emerging, probable drip-fed fables churned out by a complicit mainstream media, as well as the casual and outright racist, misogynist and xenophobic truths that not only runs through the Tory-DNA but has been typified in Johnson’s characteristically-destructive inability to hold high office, Hunt would predictably be seen as the safer, saner personality to implement the propagandistic ‘Managed No Deal’, which is in actual fact characteristically-destructive British exceptionalism code for ‘coup d’etat’.

This is the normalisation rhetoric that could form a ‘Government of National Unity’ but WILL ultimately – and inevitably – use military force to deliver the rote-propagandistic ‘One Nation’ Britain and with it; enable The Westminster and The White House (& Russian interests) elite-estate to retain control of Scotland’s £Trillion$ oil-fields and renewable energy potential, whilst simultaneously attempting to keep the coup protagonists – out of prison.

Because given the inevitable, impending militarisation of Brexit and the #TrumpRussia Presidency by #ToryAnalytica; by the #USUKCorpGovt theatre too, perhaps by PlanB dragging Iran into the false flag equation, Hunt might actually be tasked to sell to the population, #RoryTheTory’s #Ebola ‘expertise’ – that he gleaned over the course of six weeks (seriously!) to organise a pretext-attempt (which will ultimately fail) to cordon off an island-country called ‘Britain’ that’s Orwell-predicted #AirstripOne potential, was so rudely and catastrophically interrupted by a ‘lunatic’ in Berlin on 25th June 2017, as outlined here…