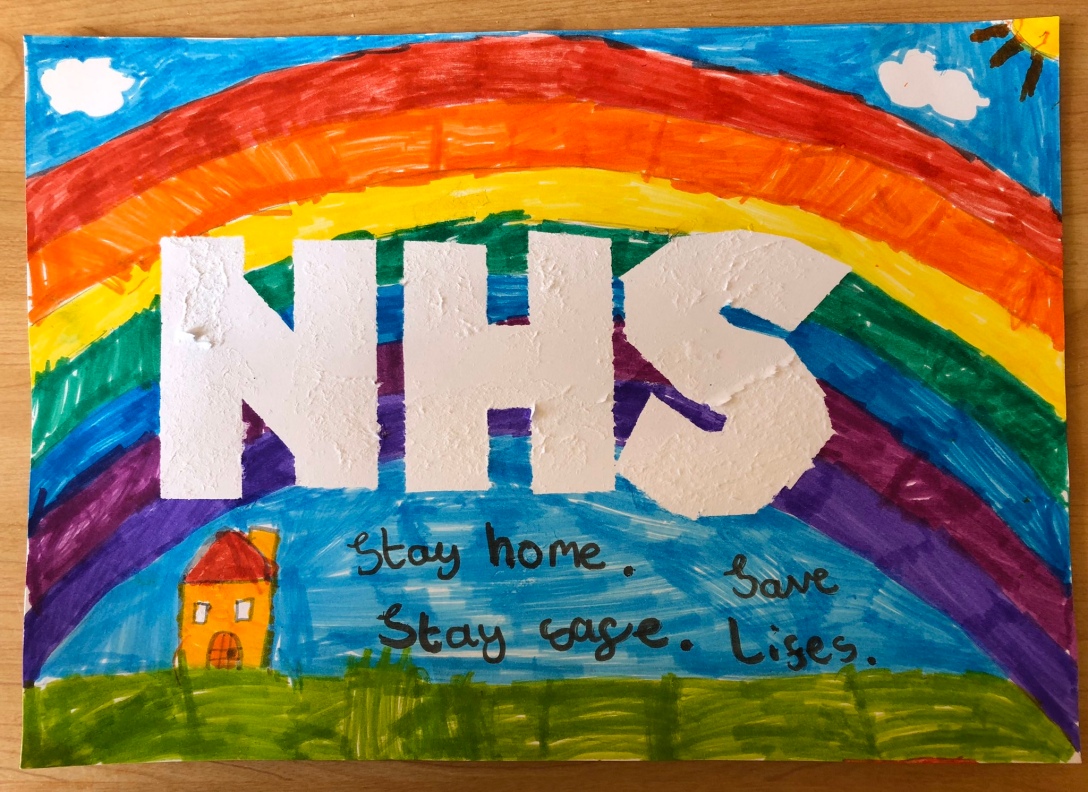 “The best propaganda is that which, as it were, works invisibly, penetrates the whole of life without the public having any knowledge of its propagandistic initiative”. Joseph Goebbels.

I write this as an ex-British soldier who served 25 years with tours of Iraq and Bosnia. And so I understand why the general public would want to show their appreciation for the emergency services at this time – but – we are are ALL being played by #ToryAnalytica; by their Thursday night happy-clappy emotionalised-construct plastered all over mainstream and ‘social’ media – which Dominic Cummings (et al) has torn from Joseph Goebbels Nazi precedented propaganda playbook…

‘V’ is for vendetta. Obviously. And of course ‘V for Vendetta‘ is a brilliantly entertaining piece of dystopian ‘fiction’ – obviously. A fiction, which like the equally brilliant and uncannily prescient ‘Children of Men‘ is fast becoming our reality. (And which is part of the reason why in my book, the adults are ‘children‘ and the kids are ‘childlings’).

However what isn’t so obvious because we were never taught it, is that V is also for ‘Volksgemeinschaft‘ – the term used by its Nazi proponents that when translated means ‘peoples community’ – or as I’d coined it ‘community nation’ – before I became aware of the actual terminology.

It isn’t a difficult concept to understand. Not at all. However what appears to be difficult (for some more than others) is to recognise its precedented place in strategic propaganda history which we must first do, in order to begin to acknowledge what it is we’re actually experiencing – with our emotions being exploited by ‘It’ – to foment and amplify the already existing sense of British exceptionalism. 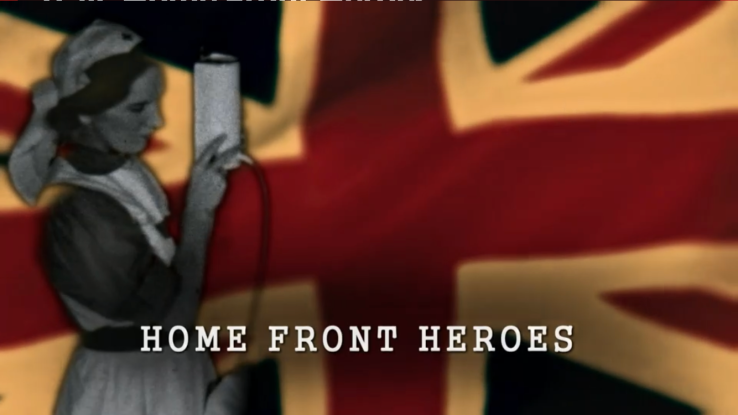 Indeed, in its pyrrhic, ‘positively’ corrosive context we’re currently being bombarded by the exact same Volksgemeinschaft propaganda playbook premise for driving a sense of [ethnic/exceptionalism] ‘superiority‘ and the ‘othering‘ of outsiders and non-conformists, by emotionalising, ‘irrationalising’ patriotic #CommunityNation themes such as #ClapForNHS & 🌈 #RainbowsForNightingale – and for those so sycophantically inclined, also by #ClapForBoris… 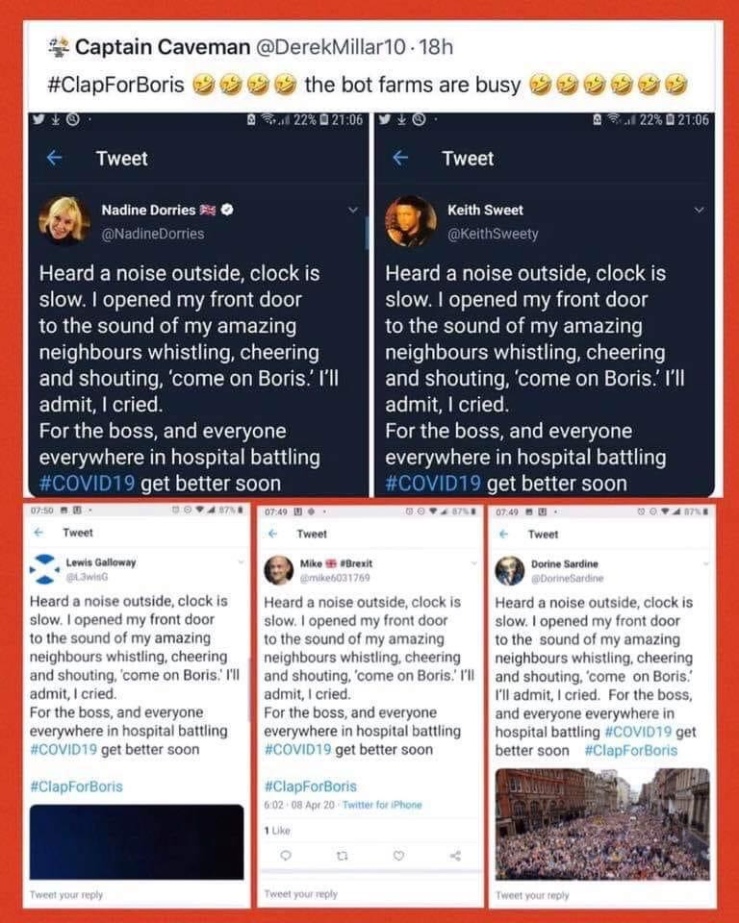 …some of which is being produced by a small army called 77th Brigade; the Cambridge Analytica trained PsyOps social media sock-puppet & bot farm arm of the British Army – the same army I served in, in the Royal Signals.

These ‘community nation’ themes are not only to be found across social media platforms being reinforced by the principal mover – the ‘trusted’ mainstream media ‘news’ – but are also being invisibly broadcast into our homes via corporate advertising – such as this example here.

It’s yet another emotionalising, patronising corporate-political Trojan Horse infiltration by what on the surface appears to be an organically grown #LocalHeroes initiative – but which itself has most likely been too, #ToryAnalytica’s own pretext set-up to “regiment the masses” (Edward Bernays) from fruition.

In this world of corporate ‘charity‘, the poppy isn’t sacrosanct either as far as these contemporary propagandists are concerned and has without a shadow of doubt, been hijacked over the last decade by a right-wing elite estate to create increased concentrations of Weaponised Waterfalls for profiteering; for Overton Window shifting the sympathetic, patriotic population towards normalised far-right; and of course – for military recruitment purposes…

“Hatred is gained as much by good works as by evil”. Machiavelli

‘It’ continues to emotionally milk the masses of their diminishing disposable income driven by ideological socioeconomic apartheid – better known as ‘austerity’ – to drive induced deprivation and debt to deliver most importantly – a mass depression – ready to hand an easily manipulated population its #PatrioticPoverty purpose on a plate; with the young fatherless, homeless, hungry men in particular, these #MaslowsMartyrs deprived of the basics; food, safety, shelter, self-esteem and sex – channelled as ‘volunteers’ into an #AusterityArmy upon a mobilisation trigger.

“The intuitive mind is a sacred gift and the rational mind is a faithful servant. We have created a society that honors the servant and has forgotten the gift”. Einstein.

This psychosocial engineering lead-in has all been part of a planned, deliberate, drip-fed State propaganda campaign that continues to Volksgemeinschaft manipulate and seal us within a fake, unified ‘pseudo-reality’ steeped in a fabricated martyrdom mentality.

We have been enveloped by an invisibly vast saturation of patriotic emotionalism, housed in the normalisation of a #CommunityNation propaganda construct; that is now getting the people ‘drunk’ on their own ideologically indoctrinated sense of British exceptionalism, locked in a perennially-defensive WWII bunker mentality that has occasionally, casually been sustained by ‘harmless’, normalised anti–European propaganda and in particular – anti-German xenophobia;

The purpose of the current phase of this ‘unifying’ Volksgemeinschaft campaign saturated in stoic-victimhood, is to steer a population to its own herded destruction; by bias-confirmation cattle-drive steeped in manipulated emotion – principally by mainstream media fronted mass-psychosis sleepwalking us into a Police State… 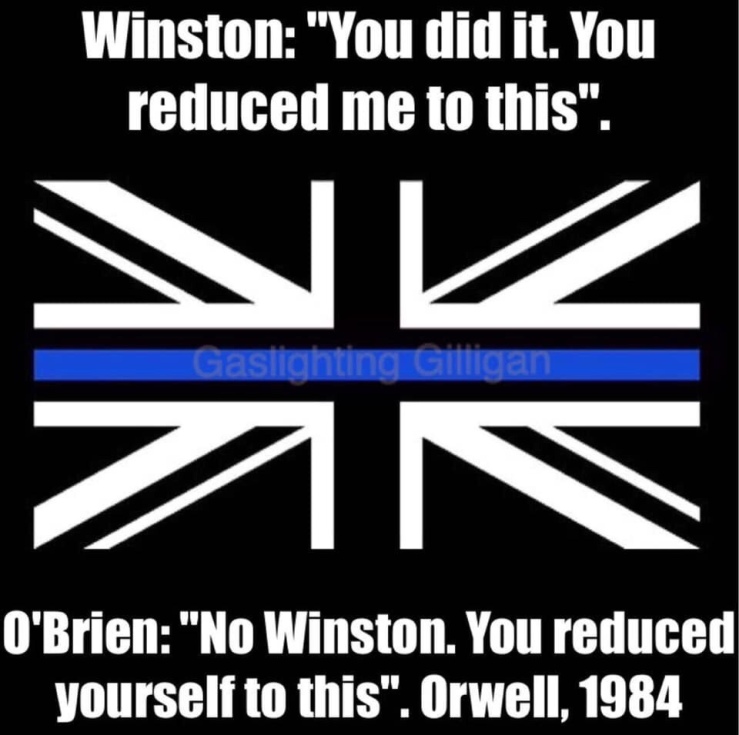 …by tapping into our cyclically-reinforced #PatrioticProgramming: Toddler to Teenager to Tabloidhood‘, with planted feelings that subconsciously, inseparably associate Monarchy, military and police – all wrapped in the Union Flag…

…to get behind The one and only Party – the Tories – who we’ve been conditioned since forever, to be the sole party-political bastion of Britishness – and the guardians of these specific Crown institutions that just so happen to be the key to control in the streets and therefore the power of the State – but whom we’ve also been limbic-brainwashed inter-generationally, to emotionally revere since pre/adolescence.

And this is all happening as the political power arm of the operation in ‘UK’ – the #ToryAnalytica COBRA Cabinet themselves, simultaneously through the continuation of their ideological ‘Hostile Environment’ identity-politics policies and practices, as they prepare (I suspect) another Reichstag trigger in order to militarise their failing #BrexitCoup d’etat…

…that in reality will be far removed from the current happy-clappy Volksgemeinschaft ‘community nation’ mind-fuck and will attempt to get the working masses; military, medical, police and civilian – to turn against each other, rather than focus on the gaslighting sources themselves – the Government and their media – not ours – and who together are #GaslightingGilligan.

Seriously. We’re all being played and as such, we are all ‘Gilligan’.

But do you know what else ‘V’ stands for? ‘Vergangenheitsbewältigung’ – or ‘overcoming the past’ – and the name of the post-war Germany process of coming to terms with their fascist past. A past which we are being dragged back to by the #AtlanticBridge but will ultimately fail and which after the coming inevitable storm, will enable sovereign peoples around the globe to visit and learn from – hopefully in unison.

And perhaps with Germany at the helm as Chair? Who better to record this unfolding history? To not only be gracefully permitted to shed themselves of a past the British media in particular have never allowed them to be free of – but to ensure that ‘It’ can never be hidden from the world again, in order to guarantee the same playbook can never be unleashed against humanity again…

This piece was previously covered in more detail in ‘The People’s Plague: Our ‘Failure’ To Comply With The Impossible – As Dictated by Gaslighting ‘Government’ & more so in my updated 2017 piece ‘Psychosocial Engineering The Tragedy-Charity Gaslight Ceremony Cycle (#MaslowsMartyrs)’ incorporating my self-sustaining model to Emotionalise > Irrationalise > Patriotise > Weaponise > Militarise and > Mobilise the population… 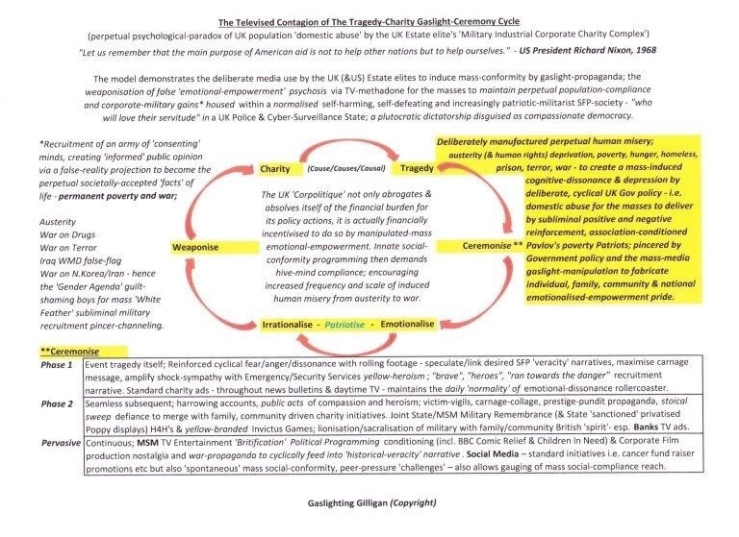 …through the corporate-State normalisation and weaponisation of TV ‘charity‘, for the mass emotional-behavioural manipulation – and mobilisation – of populations, that is intended to topple entire democracies and to collapse like dominoes – all around the world – literally…

“It’s been a year and they still haven’t let us back in. It’s beginning to look like they don’t want us…”

“There is something wrong with a regime that requires a pyramid of corpses every few years”. Orwell.