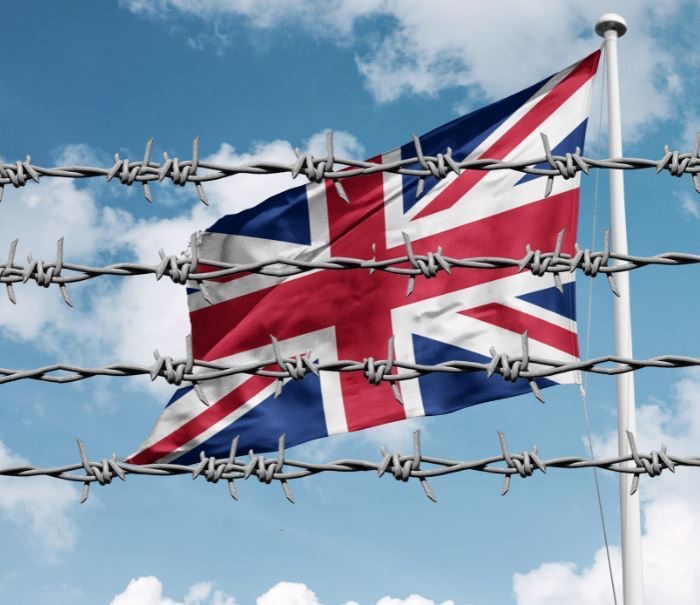 This is a short 10 minute read as I’ve previously written similar pieces in greater detail (links below).

On both sides of the ‘Atlantic Bridge’ there are literally hundreds of fascist politicians of both red and blue Party persuasion, as well as ‘respected’ mainstream media ‘journalists’ whose real role is to cyclically drive the Overton Window ever further towards the far right.

Some of these players, these State actors, despite their Establishment connections actually pretend to play ‘victims’ of the Establishment and in doing so self-righteously assume the ‘moral high ground’, usually by playing the role of ‘stoic underdog’ in a theatrical fake-fight for “the will of the people”.

Gifted cyclical media platforms by the UK Establishment from the outset in the name of ‘free and fair’ media claiming to ‘speak truth to power’, these self-proclaimed ‘people’s champions’ appeared to act ‘against’ the UK/EU “elites” interests but were in fact part of the very same collective propaganda effort to push and pull the population into the ‘welcoming’ arms the far-right, often in the guise of “common sense”.

In doing so they manipulated a #HostileEnvironment via a number of normalised narratives designed to dovetail with Tory Government policies and legislation, which in their fully-fledged fascist form can only deliver a very limited, historically precedented and therefore predictable set of outcomes; militarisation and mobilisation.

So, just as with pro-Putin Trump and Bannon’s “drain the swamp” and “Make America Great Again” rhetoric – they’re the same failing coup – in UK #ToryAnalytica’s Dominic Cummings so-called ‘anti-Establishment’ and “take back control” propaganda playbook was actually drip-feed deployed initially by the ‘irreproachable’ BBC, who themselves had pretext piggybacked the decades of xenophobic, sexist, racist, proto-fascist UK press media to insert the then unknown Nigel Farage who began his record number of propagandist appearances on Question Time.

All of which was made to seamlessly stir resentment which was cyclically and invisibly bled into all UK broadcast outlets; via Sky, LBC and ITN ‘news’ and agitprop ‘current affairs’ programming, simply by providing the Tories and Rupert Murdoch’s very own ideological decoy Nigel Farage and their UKIP Trojan Horses with Parliamentary unrepresentative platforms, in addition to the Putin sponsored ERG, TPA and a host of media-legitimised commentators from the 55 Tufton Street cabal, delivering democratically-unprecedented access into the homes – and minds – of some 65 million unsuspecting people.

By infiltrating Farage, UKIP and their other low-level right-wing agitators into UK’s dummy ‘democracy’, it was the British Establishment themselves who put the ideological cart-before-the-horse via media-reinforced platforms. This was not to reflect or inform ordinary people as we’d always perceived but to drive the population in the predetermined agenda direction, by shaping our perceptions to manipulate our sociopolitical ‘reality’ delivering their planned outcomes; simply by tapping into the human condition in order to direct our predictable emotional-behavioural responses.

As with the US side of the real ‘Special Relationship’, by gaslighting the UK population largely with identity politics – especially by gender and race – and having irreversibly crossed their own very personal rubicon in Spring 2017 in the lead-up to the originally planned crisis capitalist trigger – ‘Op Fukuglaschu’ which was supposed to collide with the theatre of unworkable Brexit ‘negotiations’.

This was meant to simultaneously militarise both Brexit and the #TrumpPutin Presidency in order to mobilise a truly global fascism which would send the working masses of each respective State to war against each other, whilst establishing and consolidating mutually supportive US, UK (& ‘Five Eyes’) and Russian dictatorships and in doing so sustain each respective hierarchical structure domestically and to impose themselves around the world via their puppet Governments with negligible internal resistance.

As such, in UK the Tories and their mainstream media today still have no choice but to continue coercing segments of UK society to attack each other in accordance with their demographic ‘fit’, upon which, the UK domestic population and indeed global Governments will predictably demand the UK Cabinet cartel ‘restore’ order, which of course will unavoidably require military force. i.e. dictatorship.

Only, with the “perfect dictatorship” having been catastrophically interrupted in Berlin in June 2017, whilst the crisis agenda hasn’t been executed as planned, it was – and remains – the same Orwellian ‘Airstrip One’ ambition for the UK elite estate to create as much carnage as possible, in order to formally align themselves with US corporate and global military might and in doing so create Atlantic Bridge architect Liam Fox’s “Empire 2.0” – minus the constraints of The Geneva Convention.

And whilst people still deride Fox for that ‘throwaway’ comment and his “easiest free trade deal in human history”, as well as make fun of Johnson’s “Titanic success of Brexit” and both his and Cummings “oven ready Brexit” later housed in a “Moonshot” – seriously – we really shouldn’t scoff. It’s just that we weren’t in on the ‘joke’. Because as time and unfolding events will eventually reveal to us one way or another, Eton’s finest knew exactly what they meant and what’s truly terrifying – is that they actually meant it.

That’s why when cliched centre-left academics, politicians and leading Twitterati write “We are in dangerous times” I have to consciously resist a resigned eye-roll, because they haven’t processed how these “dangerous times” are being deliberately and desperately engineered; including via COVID, Government ‘incompetence’ and inciting their own right wing base with anti-masker rhetoric, shaming ‘anti-vaxxers’ yet coercing and instilling a sense of misplaced ‘moral superiority’ in those who comply – which serves to keep the entire population(s) divided and at each other’s throats by any and all emotionally manipulated means.

Tragically, the only thing standing in the way of these obvious, evidenced and precedented realisations for our centre-left ‘experts’ is their pyrrhic safeguarding of individual and collective reputations to “reject the evidence of their eyes and ears” and as such, our best and brightest sub/consciously continue to rubberneck this Groundhog Day car-crash by prioritising their own peer-group standing over democracy and their own children’s futures.

“The Party told you to reject the evidence of your eyes and ears. It was their final, most essential command.” Orwell, ‘1984’.

Far too image-conscious, they are contained, constrained and debilitatingly condition-shamed to objectively process the logic of it all and call it out – or God forbid – publicly back ‘Gaslighting Gilligan’, herded as they are by the same cyclical spoon-fed media narratives to become cognitively corralled as a result of nothing more than an unfounded fear of potential ridicule and ostracisation. In a word – ego.

Like it or not, acknowledge it or not, from the BBC, Tories and Murdoch media empire came Farage and UKIP who were then morphed into The Brexit Party, then The Reform Party and by engineering their own tedious “common sense” manufactured “culture wars” and self-flagellating “cancel culture” martyrdom narratives, have now successfully delivered a complicit Ofcom broadcast licence for the victimhood-steeped GB ‘News’ to come fascist full-circle, with yet another #ToryAnalytica Trojan Horse outfit to keep doubling-down on the real fake news.

And which also rather handily doubles-up as a dangerously absurd goose-stepping diversion to deflect our attention away from the principal vehicle that drove 52% (allegedly) of the population like passengers towards this point in history; the UK mainstream media.

So yes, what we’re witnessing is a mutually supportive, self-sustained State and corporate media-political revolving door which continues to ‘legitimise’ the Tories financial corruption and socioeconomic sabotage, whilst simultaneously cementing their fascist grip on UK political power – and evading prison – as they keep scrambling around for their latest attempt at a PlanB pretext trigger (currently via the Middle East) to ‘justify’ UK and US militarisation.

To that end, regardless of pretext, at the very minimum #ToryAnalytica attempted militarisation is inevitable as it tends to be a pivotal element of a coup d’etat; especially a failing one.

In summary: next week on Friday 25th June 2021 will be four long years to the day of going public with ‘Gaslighting Gilligan’ (honestly, you have no idea of the scale of awakening we’re in for – it’s all in the book) since when I’ve been trying to warn the UK and beyond “general population of what it doesn’t know” (Chomsky) and of our impending global-revolution reality.

And so with as much patience and politeness as I can muster in the face of all the available evidence aligning with historical precedence, I’d like to make a personal plea – calmly and rationally – to genuine centre-left politicians, commentators and ordinary people alike;

Wake the fuck up. Please.

NB: Both Facebook and Twitter continue to suppress my accounts, so please feel free to copy the links and share them across all platforms, especially with family, friends and political contacts outside UK.