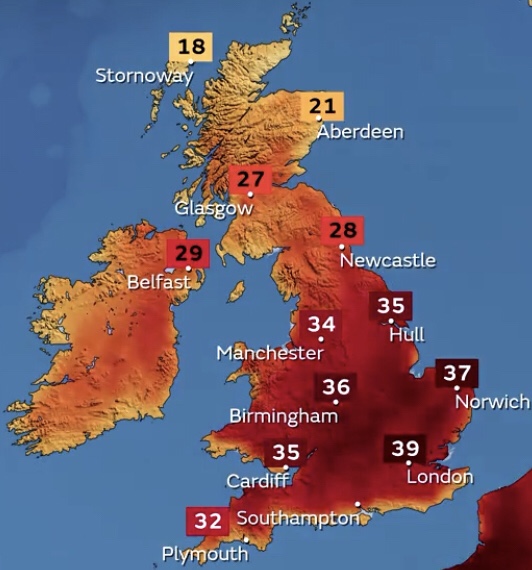 “Shall I tell you a terrible truth about politics and human nature? You can probably make a good case for almost any course of action.” Boris Johnson (2013)

(5 minutes) This unprecedented heatwave about to arrive over western Europe and ‘Global Britain’ has opportunist potential for the #ToryAnalytica COBRA Cabinet and their entire UK corporate media machine, to begin the inevitable militarisation of Brexit but in doing so, to also shift the blame onto the general public and attempt to guilt-shame us into compliance.

So also anticipate a host of senior ‘centre-left’ members of ‘The Party’ – politicians and media figures – to attempt to ‘validate’ the deployment and placate the public with promises of change; whilst ensuring the exact same hierarchical British Establishment structures remain largely unchanged and its perpetrators untouched by due process.

The impending deployment however, cannot be sustained without popular public support and will ultimately fail – but at a cost.

Unfortunately the Tories see themselves as having no choice but to proceed regardless, and to create the carnage and chaos they always had planned in order to provide their own pretext to gaslight ‘rescue’ society from itself and ‘justify’ putting the population down via Operation Yellowhammer;

‘Any democratic decision that needs to be enforced or ‘supported’ by a Government deployment of the military – i.e. #OpYellowhammer – in order it can maintain or secure political power via the streets, ports and infrastructure etc, is in fact in any conventional, consistent, rational-thinking and ‘functioning democracy’ – a coup d’etat.’ ‘Brexit: All Roads Lead to Rome – Militarisation’ (2018) https://wp.me/p94Aj4-Og

This is because five years after their original 2017 ‘Op Fukuglaschu’ attempt (see link and video prediction below) with all the available evidence now in the public domain, many of these Orwellian ‘Party’ members are going to prison – or worse.

‘The Tories trigger is currently being achieved primarily through their ongoing COVID weaponisation, in addition to the other deliberately engineered and opportunist constructs which will be made to converge with their corporate partner strategies – aka “the cost of living crisis” i.e. corporate-political engineered destitution, to culminate in mass civil unrest and NHS collapse this autumn, then winter and into 2023’. ‘The PM Resignation Ruse & The Tories Boiling Frog March To A UK Winter War’ (2022) https://wp.me/p94Aj4-3e1

So don’t become an unnecessary working class casualty of the Tories class war – certainly not at the hands of each other – having already been imperceptibly ‘boiling frog’ set-up over the course of decades to target each other; especially minority groups.

“Propaganda must facilitate the displacement of aggression by specifying the targets for hatred.” Joseph Goebbels

Instead, DO LOOK UP at the actual Westminster aristocratic cause of the inevitable mass civil unrest – and direct your energies accordingly.

This – ‘Op Fukuglaschu’ – is how the Trump Presidency and ‘oven ready’ Brexit Britain were both to have been simultaneously militarised in 2017, in order to mobilise a US/UK-led global fascism…

“It takes only six weeks to bring a country to crisis, after which, with a violent change of power, structure and economy, you have the period of ‘normalisation’ which may last indefinitely”. Yuri Bezmenov, ex-KGB PsyOps Specialist (1984)

Both Facebook & Twitter continue to suppress my accounts. If sharing #GG, please do so direct to your own accounts but DO NOT include my ‘Johnny Berlin’ or @GasGilligan details as their algorithms will automatically bury the piece. Thanks.

‘Fascism, steeped in pathological hypocrisy, superiority entitlement and inveterate victimhood, is the group-characteristic extension of narcissism and is the Machiavellian-patriotic, militarised business model extension of joint Government and corporate engineered crisis-capitalism’.