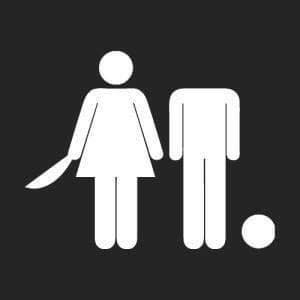 Synopsis: The very fact there’s the same pattern in ‘Family’ Courts across all English speaking democracies tells us this isn’t a chaotic accident. The synchronicity is in itself the indisputable evidence of a deliberate, orchestrated design…

All Anglo-sphere countries around the world are following the Spanish ‘Family’ Courts model; the Government-judiciary structures working with women’s aid groups posing as ‘charities’, manipulate domestic violence statistics and wording in ‘official’ reports to disappear male victims and female perpetrators which are then amplified by a complicit mainstream media. In doing so they empower opportunistic women beyond the law and humanity, to lie. The State, ‘charities’ and media then ignore the epidemic of false accusations, as this is one of the key and necessary outcomes required – to destroy and channel boys and young men.

But why? Well, it isn’t just ‘profit’, that’s the common ‘comfort-zone’ cop-out for those who refuse to process the societal-consequential reality; and the organisational scale, time & effort still going into doubling-down on a narrative that buries male victims and facilitates false accusations.

Put simply, the purpose is to dismantle and reset societies through the destruction of the family unit and in doing so, psychologically and emotionally break children – especially boys – devoid of male role models in order to then cyclically feed them by induced #PatrioticPoverty channelling into profitable State structures – principally the military, followed by gangs/prisons to meet their esteem belonging needs. Or they can be lost to the ‘inexplicable’, silent male-suicide epidemic or become invisible on the streets.

If you could see it in action, this #PrisonMilitaryIndustrialComplex – it would look something like this; 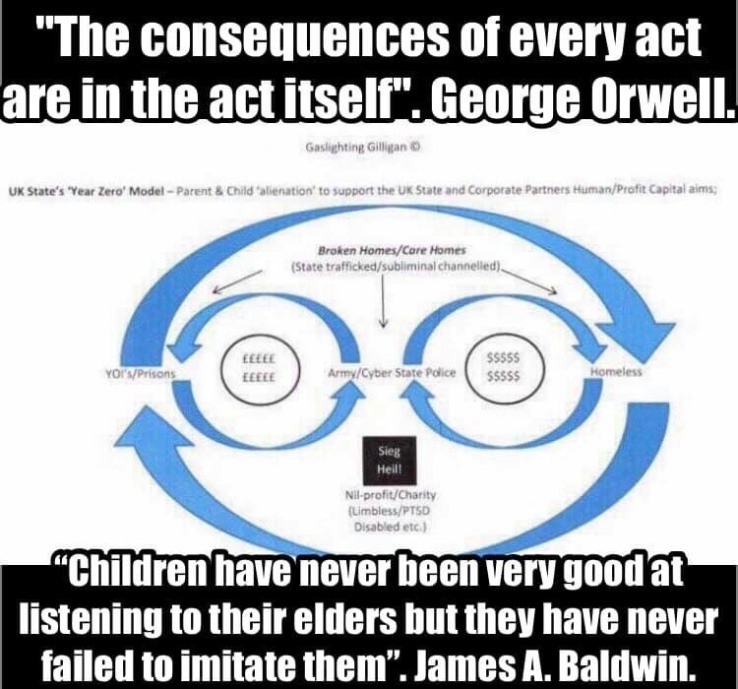 The ultimate goal in any case is to ensure that men cease to present the threat-potential in any cohesive numbers to the existing hierarchical order, which ensures those at the top of it, retain power; pure power.

“We shall abolish the orgasm. Our neurologists are at work upon it now.” George Orwell, 1984

Orwell was right, we just didn’t understand what ‘abolish the orgasm’ would look like, nor could we conceive of the sheer seismic-scale and incredulity of it…

This article and video ‘False Accusations in Spain’ is the most terrifying thing I’ve ever read and watched.

However through my (free download) book Gaslighting Gilligan I’d become all too familiar with similar patterns in UK institutions and especially media; the Spanish legislative and kangaroo courts ideologically-orchestrated programme automatically presumes the guilt of men on matters of domestic abuse whereby on a daily basis, some 350-400 accusations are made [against men] and 90% are false.

It’s terrifying because its dystopian detail has been happening since 2004 in Spain (which kind of makes sense when you understand that Spain’s contemporary-governance was spawned from Franco’s fascism) and which can be summed up in one short sentence by an estranged Grandparent;

“This isn’t justice. It’s a terror”

And this ‘terror’ is exactly the purpose and design of the impending UK Violence Against Women & Girls legislation, supposedly to ratify The Istanbul Convention propaganda, which will be effortlessly passed into Criminal Law on the back of the current timely wave of Westminster and Whitehall political and corporate Hollywood and mainstream ‘news’ media misogyny and sex-pestering – projected into the general public psyche as society’s pervasive and perverted ‘truth’ – which will automatically put the onus of guilt on the accused – ordinary men to prove their innocence of domestic abuse and of insidious, fascist-language ‘Misogynistic Hate Crime’; “words” do indeed “build bridges into unexplored regions” said one Adolf Hitler.

“There’s no way to rule innocent men. The only power any government has is the power to crack down on criminals. Well, when there aren’t enough criminals, one makes them. One declares so many things to be a crime that it becomes impossible for men to live without breaking laws“. [Click here] Who wants a nation of law-abiding citizens? What is there in that for anyone? But just pass the kind of laws that can neither be observed or enforced or objectively interpreted – and then you can create a nation of lawbreakers – and then you cash in on the guilt. Now that’s the system, Mr. Reardon, that’s the game, and once you understand it, you’ll be much easier to deal with”. Ayn Rand, ‘Atlas Shrugged’.

The defences for which will be made impossible by the joint destructive accusatory actions of unscrupulous women and partners having become toxically-empowered by a corrupt State.

Tyranny is already here and it’s smiling in your face whilst peering over your shoulder with its eyes on your sons.

“When we can cut man from his own past, then we can cut him from his family, his children, other men. There is no loyalty, except loyalty to The Party… We control life. At all levels. We create human nature. Men are infinitely malleable”.

Its entire purpose is to separate fathers from children, especially boys, in order to psychologically break and breed them physiologically broken with attachment issues with many yearning to seek out male role models who will help them rediscover by channeling to meet their self-esteem needs; acceptance and belonging.

They will find these needs being met and their purpose being realised within the military of the ‘democratic’ State who are unable to conscript soldiers, as the Police State itself creates a Perfect Dictatorship.

You can go straight to the video however the following statements (with my final observation at the bottom) are some of the more salient points made and which are currently also being manipulated in the UK State and media to feed into the cyclically, mass-manipulated and manufactured ‘pseudo-reality’ agenda.

“If you’re a man, you’re the last man. Your kind is extinct. We are the inheritors. Do you understand that you’re alone? You are outside history. You unexist”. O’Brien to Winston Smith in George Orwell’s 1984

Reporter “Is it correct that for these cases, there’s no presumption of innocence?”

Lawyer, JPR “The Gender Violence Law sets out exactly the presumption; there is a presumption of guilt because the man has to prove he is innocent…. There is an ideological issue, it’s not a question of legal principles”.

Reporter “What rights have the men?”

Lawyer JPR “The men have no rights. For the man who is sent on the street there is no sheltered housing, no financial help, no rehabilitation schemes and no treatment system. Because of these facts it is clear, that many men end with psychological problems because of overnight stays in prison for a crime which he has not committed”.

Reporter “Is it correct that there are cases where the man has only a few hours to leave his home?”

Lawyer JPR “A few hours or none at all. Because now, with the law of violence, once an accusation is made even without evidence or any suspicion they automatically arrest the man… He goes into prison and after 48 hours he enters in Judicial custody… When they leave the prison they can’t return to their home because they are at risk that the wife or the partner make another accusation… There are no measures to care for these men who are on the streets with no notice”.

Reporter “What is the reason for this situation?”

Reporter “Are the Spanish Courts violating the law?”

Lawyer JPR “Well, the Spanish Courts and family violence are complying with the law of gender violence. There were and there are serious doubts about the law’s constitutionality but the Constitutional Court has ruled it is constitutional. However it’s clear this law may violate the European Convention of Human Rights in several Articles in addition; Articles 6, 8 and 14; why? Because there is no fair trial. The processes are also often very slow and damage and break the contact between parents and children until the courts resolves the criminal matter, because it does not respect the process of equality. I know this is contrary to the European Convention of Human Rights”.

Narrator “There is no help for the approximate 125,000 men that go to prison every year”.

There were 142,000 accusations in 2008 of which 13% ended in convictions. A judge, Francisco Serrano, declares that only 9.7% end with conviction and compares it with Guantanamo and has also describes the new proposal from the Government to make it easy to discontinue the relationship between father and child as some kind of “holocaust”.

Magistrate, MS “The Spanish State should never allow a child to be used as a weapon, because the damage caused is horrific and will lead to major social problems in the very near future. And after that I do not know how we can solve these problems… Over the last couple of years the word of a woman in Spain means truth and that is simply outrageous”

Reporter “Is the law violating Spanish law itself?”

Reporter “With a situation like this, how do you see Spain today and in the future?”

Magistrate, MS “That the Law Against Gender Violence, the penal approach of 2003 has been a failure, it is crystal clear that after five years the situation hasn’t improved, in fact it has grown worse. I confirm that it has become worse, there are more battered women, we do not arrive in time to protect and we are abusing thousands of children, thousands of Grandparents and thousands of parents. Therefore we did not fix a problem, instead we have made it worse; now we have more than one problem.”

Reporter “Do you think Spain is violating human rights?”

Magistrate, MS “I believe yes that we are. During the last years we have neither respected nor guaranteed the fundamental rights of a person”.

Reporter “And concerning the families?”

MS “Particularly in the case of the families”.

Victim of false accusation, Eufemiano Cespedes “I have been living in a container for six years because after the separation from my ex-wife, the judicial system, without taking into account the financial opportunities that she had and I had, left me in ruin and the only option was to live in a container… In our marriage I put the matrimonial assets in her name, she is a multi-millionaire”.

Prime Minister Jose Luis Rodreguez Zapatero speaking in 2004 “We have created a good law to protect women who suffer from mistreatment. For a better Spain”.

Speaking to a largely female audience in 2008 “It’s true that in these four years we have done many things, first of all the Equality Law, the most advanced law on equality in all the modern democracies in the world, or so they tell me, and so it is recognised outside of Spain. And I say, it’s the law that the women of this country deserve, the most advanced worldwide.”

Narrator “However, the Ministry of Equality and The Women’s Institute continue their work. The Minister [of Equality] Bibiana Aido has opened new courtrooms for Gender Violence and today Spain has 91 new courtrooms, only to receive many false accusations”.

The motive is a militarised Police State(s) through an imperceptible, cyclical, self-sustaining #PrisonMilitaryIndustrialComplex;