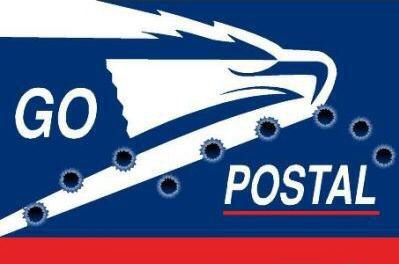 This isn’t a long piece because I’ve already written it – in 2017 – but was blocked on Twitter by numerous Remain blue-tick bubble celebrities for my troubles. Yet here we are reaching the endgame of the very same #ToryAnalytica mainstream media fronted propaganda campaign, that I warned of in ‘Tedious Twitter Twaddle’ – two years ago.

But back to today…

As well as being a Terry Pratchett fantasy novel, ‘Going Postal’ is an American term which according to the Urban Dictionary was originally coined from a ‘series of real life shootings in the postal service, it usually means that someone is about to go nuts or off the deep end’.

This particular Americanism is entirely appropriate too, being as that’s whose corporate-political grasp that UK ‘PLC’ is being asset-stripped for and hived-off.

Hint: it’s no coincidence that we simultaneously have two dangerously unqualified clowns as US President & UK Prime Minister; because just as I warned the Irish Embassy and German Bundes Polizei in Berlin on 25th June 2017, the #TrumpRussia Presidency & Brexit are the same (failing) #ToryAnalytica #BrexitCoup d’etat – as detailed here. (You’re welcome!) 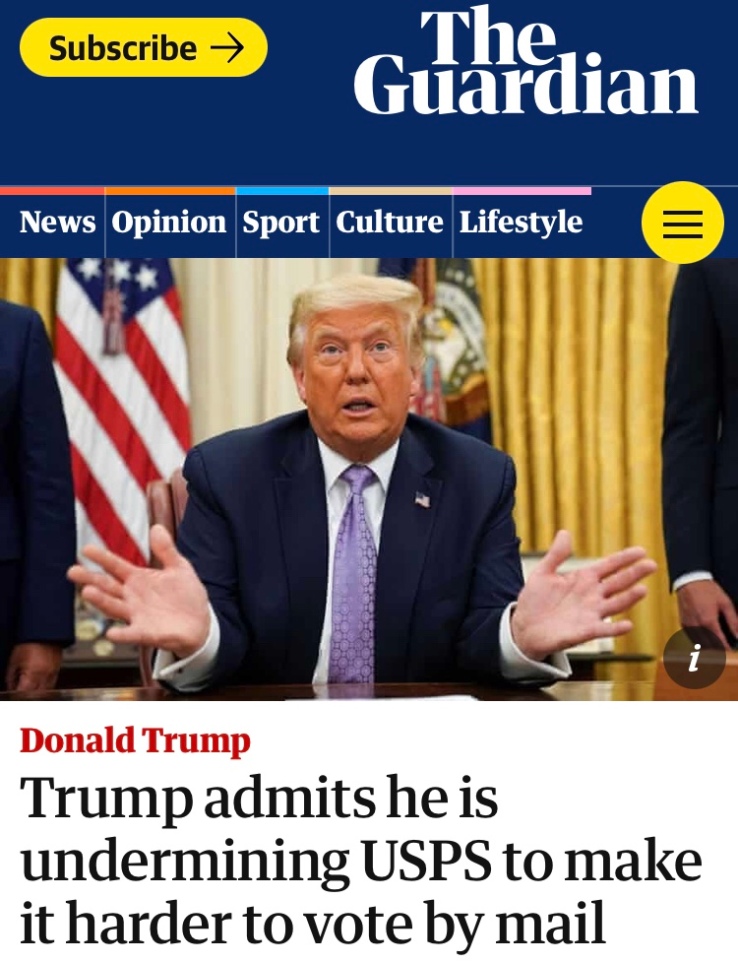 Edit-insert: Trump admits he is undermining USPS to make it harder to vote by mail (2020)

Now, there are honest UK journalists out there but after a catalogue of misdemeanours by the State broadcaster in particular (but also Sky & ITN – they’re all at it!) working hand-in-glove with the #ToryAnalytica COBRA Cabinet (read #DominicCummings), today the BBC’s Laura Kuenssberg brazenly announced that she’s not only broken electoral law having gained access to postal votes but also openly broadcast, that the votes were “looking pretty grim for Labour in a lot of parts of the country”.

This is an imprisonable offence and she should be suspended immediately pending investigation – but then it would be a total waste of time as the British elite estate power structures would only be investigating themselves. And they don’t have a very good track record on these things…

‘Gone rogue’ has a similar meaning to going postal; ‘Someone who acts independently and wayward from the usual group, generally acting in an outrageous or abnormal manner’. The thing is, Kuenssberg herself hasn’t necessarily ‘gone rogue’ because she’s the pervasive rule rather than an exception; being that a significant number of her BBC colleagues have been performing a similar (not-so secret!) service, to return or rather install as many Tories as possible back to Westminster – by any and all communications means.

Post office IT fiasco: Decade of hell for accused.

This is very much a #ToryAnalytica team effort and she’s is in plentiful corporate-political media company, who will be sitting in a dock alongside a number of once-trusted household-name ‘journalists’ whose true role has become abundantly clear; not to speak truth to power but to support and sustain It and its Orwellian ambitions.

An agenda that began its current phase in 2010 by cyclically platforming its own ideological decoy; Nigel Farage, ‘his’ UKIP, then ‘his’ UKIP MkII Brexit Party detailed here; the long and short of which have been nothing more than Conservatives HQ’s own media-amplified phantom political party; a boiler-room operation; a Trojan Horse imperceptibly steamrollered into UK politics to ‘justify’ the Bannon/Cummings/May/Johnson rote-scripted rhetoric ‘Take Back Control’, ‘Strong & Stable’, ‘No Deal’s Better Than A Bad Deal’ & ‘Get Brexit Done’ to drive the failing coup.

No, it’s the BBC et al as a ‘news’ brand that is ‘going postal’; that has ‘lost the plot‘, that’s ‘gone off the deep end’ as its litany of #ToryAnalytica intertwined lies begin to expose it further; as its excuses for failing to hold Boris Johnson to the same standards of scrutiny as the other party leaders begin to unravel, with Andrew Neil’s fake public challenge designed to throw the plebs off the scent for a few more days. Just until they could get the General Election day delivered, with the seed-planted result sealed in our collective hive-mind, having already bought into the results of strong Tory returns, before a single vote on polling day has even been cast.

Because just as with Ruth Davidson’s illegal postal vote intervention in 2014, I believe the whole point of Dominic Raab’s, then Kuenssberg’s postal vote ‘confession’ today, is all part of the electorate being psychologically ‘softened-up’, with a series of advanced, drip-fed ‘inevitability narratives’…

This gaslighting also includes a costly, simultaneously Royal Mail delivered – not activists delivered – deluge of Tory & LibDem campaign literature in Scotland, as well as a Fakebook saturation of a #ToryAnalytica tactical voting campaign to ‘Get Brexit Done’ – all of which combined are selling us the pretext of Tory/Brexit success story and Labour ‘losses’ in order we are all more susceptible and therefore more likely, to readily accept the #TheParty’s predetermined GE2019 outcome as so-called ‘democracy’.

When in actual fact, #ToryAnalytica working with the BBC, Sky News & ITN and the press – have all played a part by propaganda commission and omission to maintain the illusion of a functioning democracy but are in fact collectively keeping a corrupt, proto-fascist ‘Government’ in power.

But do you know how we can all know that all the broadcasters have to be involved?

Because not a single MSM-outlet has broadcast as ‘news’, this patently obvious ‘No Deal Brexit’ fact that will unquestionably require military ‘support’, a fact for which #ToryAnalytica inadvertently revealed in September 2018, that they already had a plan to militarise Brexit via #OpYellowhammer. And that fact is this;

That any ‘democratic’ decision that requires to be enforced or ‘supported’ by a Government deployment of the military, in order it can maintain/secure political power via the streets/ports/infrastructure etc, is in fact in any conventional, consistent, rational-thinking and functioning democracy – a coup d’etat…

‘Brexit: All Roads to Rome – Militarisation’ (2018) by #GaslightingGilligan;